Day 1
Early in the morning, depart north to Bahir Dar via Debre Markos.  On the way visit the Portuguese bridge, said to have been the first bridge in Ethiopia.  Afterwards, you will pass through the spectacular Blue Nile Gorge.  The gorge extends nearly 400km and reaches depths up to 1500m.  Overnight in Bahir Dar (hotel).
Day 2
In the morning, take a boat trip on Lake Tana to visit the island monasteries, such as those on the Zege Peninsula and Kibran Gabriel (not allowed for women), and the source of the Blue Nile River.  In the afternoon, drive out to the Blue Nile Falls for a short hike in the area.  Finish the day with the sunset over the lake.  Overnight in Bahir Dar (hotel).
Day 3
After breakfast, continue north to Gondar.  The four-hour drive will take you through rural villages, offering wonderful insight into the Amhara culture.  After briefly settling in your hotel, explore the sites of Gondar, including a visit to the Royal Enclosure, with six castles and several other buildings.  Additionally, visit Fasilidas’s Pool, still used for Timket celebrations today, and the Debre Birhan Selassie church, with the most famous ceiling in Ethiopia.  Overnight in Gondar (hotel).
Day 4
Early morning, depart north for Axum, enjoying spectacular views of the Simien Mountains.  After stopping for lunch in Adi Arkay, proceed driving through the dramatic Tekeze Valley, offering some of the best landscapes in the country.  Proceed to Axum, home of the ancient Axumite Empire, the Queen of Sheba, and the Ark of the Covenant.  Overnight in Axum (hotel).
Day 5
Today will be a full day visiting the sites of Axum, including the famous obelisks (one that was recently erected after being returned from Italy), the Queen of Sheba’s Bath (which supplies water to Axum year-round), King Bazen’s tomb, and the Queen of Sheba’s
REQUEST PROVIDER OPEN PROVIDER PROFILE 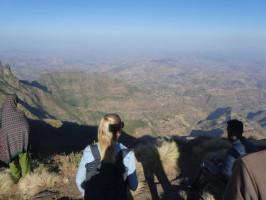 Day 1 Early in the morning, depart north to Bahir Dar via Debre Markos.  On the way visit the Portuguese bridge, said to have been the...